High Technology in Service of Archaeology 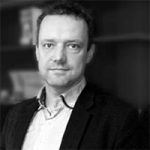 If you want to take a picture of the real world, there are a number of ways to go about it. Very many sources and media are available, and it has become really simple to publish pictures. Works of art themselves or reproductions of them, or perhaps simple photographs, can bring them to you—albeit not in their full reality. Artworks from ancient times become increasingly rare as you go back in time, and they are viewed as curiosities from a thousand year’s distance.

There is nevertheless one perspective or viewpoint in which it is less the existence of the artworks than the right focus or approach, or perhaps the technology capable of exploring them for you. This is none other than when you examine the developed or changing structure of what is still visible of settlements in their entirety today. Lines, circles, depressions or elevations: the way they belong to and connect with each other and their relationships are all artworks that can be inspected as a whole today. The settlement of Koh Ker in Cambodia still exists and it is an excellent place with which to present these relationships and opportunities.

The possibility of seeing Cambodian heritage in this way was first pointed out in 1994—apart from early aerial photography and traditional aerial photograph interpretation—when the global radar survey from the space shuttle in the “NASA/ JPL outreach” programme became available for cultural applications as well. The easily recognisable picture of Angkor prepared from these images was then circulated among professionals working in heritage conservation, as well as to the press. The view produced by the imaging radar equipment clearly presented the structure of the former capital as a cultural landscape and opened a new era of historical analyses.

Satellite images from the 90s available for civil purposes also brought significant development, but the detail of these has not yet enriched us with significant discoveries because have been unable to take advantage of them given plant cover present, especially in Southeast Asia. We also experimented with deductions, made from particular local alterations in the vegetation, about the shape and structure of former towns, but we did not achieve spectacular success in this area.

When the work at Koh Ker began, the fastest solution was an aerial recording made with a handheld camera as a passenger on a powered hang-glider. These so-called oblique aerial photographs permitted us to make a quick overview and identify ruins farther away from more frequently used and explored paths.

Remains could be explored by systematic search, and the old water reservoirs and other water facilities were easily identified and could be easily distinguished from the current rice paddies by their size.

Although we did not work with such images on the territory in question, I should mention infrared range photography as a point of interest. Unlike the above, it can present alterations in the plant cover very sensitively—possibly because the remains below the surface change the water circulation in the soil—so that former buildings become clearly visible. This kind of survey works most effectively on cultivated areas that are not covered in water and where crops are produced. It could be successfully used in the Cambodian climate at the end of the dry season.

Nevertheless, the latest revolution in aerial survey has been doubtlessly brought by active scanners. These are devices that emit some kind of signal such as radar and measure the reflections of that signal while they scan a larger area. There are a variety of geophysical devices used on the surface but we shall stick with our topic and deal with aerial devices. The most useful among these tools today are the LIDAR devices.

They work by emitting a laser signal and measuring its reflection. This measurement is not only of the time taken for this reflection, which is useful in measuring distances, but also its other characteristics, for example, the strength of the signal or multiple reflections. All this is performed by a rotating unit emitting hundreds of thousands of impulses in a single rotation and then monitoring all the reflections. Thus in principle it works like an ultrasound marine or radar aerial measuring device, but with much greater velocity. It is capable of surveying a quite dense network of points from a plane flying relatively quickly hundreds of metres above the ground.

In the case of Koh Ker we took part in one such survey as a professional and financing participant of an international consortium, some of the professional achievements of which have previously been published in the columns of this magazine. The instruments were carried by a helicopter, which can be effectively manoeuvred around small areas. Although it is an accepted technology today, the LIDAR survey is also curious in the sense that there are no generally accepted and methods used in processing and interpreting the data collected. The enormous dataset, which contains very precise measurement results, provided us with some great opportunities for experimentation. 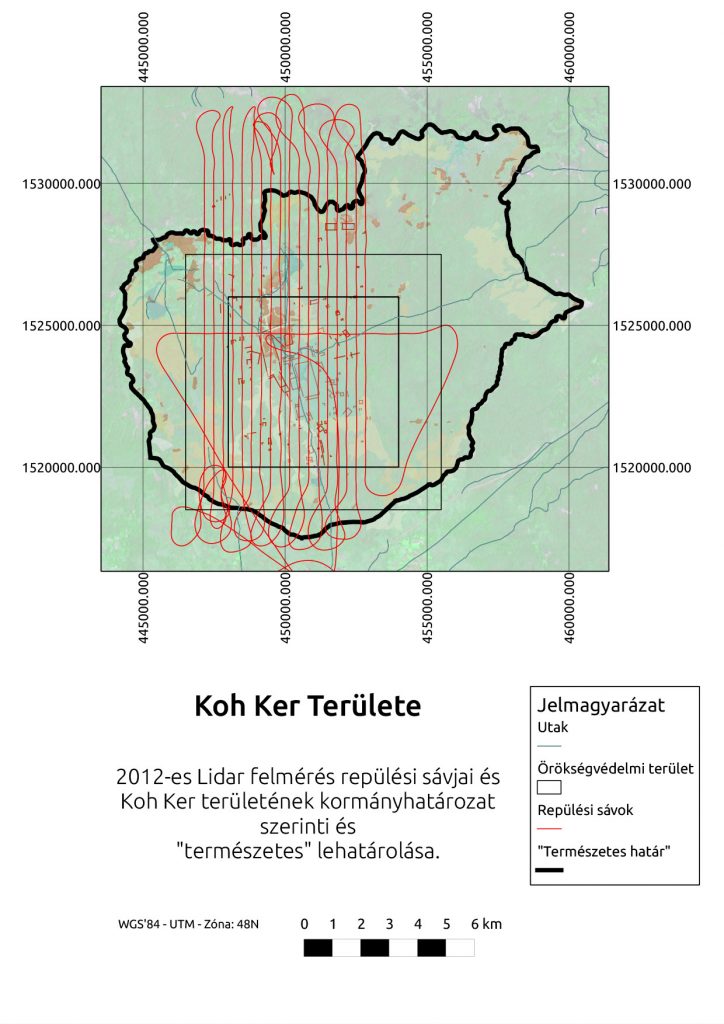 Koh Ker was surveyed from a helicopter. You can see the lines of the survey and the turning points at the end of each of them. The map was prepared as part of a proposal for a management plan for Koh Ker and the thick line marks the natural boundary and the blue square presents the area recommended for World Heritage purposes.

The survey is followed by the lengthy labour involved mostly in signal processing and mathematical calculations. The first step generally involves differentiating between plant cover and the points of the surface. This is necessary in order to see the surface and reach the remains on the surface, as well as to deduce the phenomena laying below the surface from the minor changes in the terrain. The latter is in essence the identification and documentation of potential sites of interest for archaeologists.

It is important to note that while photographs can be taken by conventional cameras during a LIDAR survey, the LIDAR system does not in itself provide a viewable, easily interpreted image. If you wish to produce an image that can be understood and interpreted by everyone, then a number of decisions need to be made.

On plate (sky.tif) ….. you can see the northern part of the Rahal, which at first sight appears to be an aerial photograph with thick plant cover (the green colour of the soil might need explanation at best). This, however is an artificial image from a LIDAR survey, prepared by colouring the points assessed as plant cover in green and by modelling sunshine. Thus the plant cover has become plastic and the forms have become clearly interpretable due to the shadow.

Nevertheless, if you enlarge it, you can see the ‘trick’ and that the image is not real, the plant cover is not vegetation, but only shadowed, green-coloured bulges above the surface. The image falls apart but it is very useful in giving a comprehensive initial view of the area.

When the points identified as plants are removed and a contiguous surface is laid across the remaining points like a rubber bedsheet, the structure of the old settlement is revealed. The representation of mountain ranges in school atlases is probably familiar to everyone. The height of mountains is expressed by shadowing and colouring according to height. The combination of the two provides a really spectacular and easily interpretable result as long as you know what you are looking at.

Plate shows the central area of Koh Ker. The Prang is in the top left corner and you can see the hill behind it in vivid yellow due to its height. The centre of the picture is occupied by the Rahal water reservoir cleared of plant cover. Imagine for a moment, what would happen if you didn’t know what you were looking at. You might think that it’s an artwork from a creative painter who is inspired by geometric forms and prepares pictures in this way. Anyway, the lines, the forms with right angles and the regularly discovered depressions are marks made by humans. They were not painted on canvas, but rather on the landscape a little more than a thousand years ago.

There are other opportunities beyond representing relief. When you see the landscape, especially from high above, the system of lights and shadows helps in interpreting the shape of hills and mountains. However, what happens if you want to see smaller elevations, and also from the air? LIDAR allows you to survey phenomena which might not be visible to the naked eye and which due to the precision required are known as micro-variation changes in archaeological work. The response is an obvious one: in that case “let’s boost them up”. However, there are also buildings on this very same landscape, such as the Prang or the hill behind it that enlargement would make too strong. Fortunately, there are other methods, too. If you don’t represent the relation between size and light/shadow, but instead model the direction of flow of water, then you can get an image where the large hills look smaller and small phenomena are emphasised more. This is known as ‘false shadowing’.

You can see that much more is visible on the picture created in this way and that the number of lines and shapes is almost confusing. Another feature of the picture is that the depressions are ‘filled up’ with black colour. Thus the depressions and basins build a fragmented, but still clearly discernible system are more easily seen, for example, the north-western part of the Rahal water reservoir where water actually collects even today. The square structure to the right (east) of the Rahal is quite noticeable on Plate …

This is Banteay Pir Choan and the complex belonging to it, which is only visible on the LIDAR image because only a fraction of the phenomena seen here can be made out with the naked eye if you walk in the area. In a form characteristic to Khmer architecture the central sanctuary is followed by the characteristically walled courts working outwards. If you discover something like this anywhere on an aerial photograph, satellite image or even in the Google Maps service, compare it with this and you can probably see the remains of a typical Khmer building. You should imagine the territory of Koh Ker as a network of independent little centres just like this, complete with streets and water management facilities such as dams, water reservoirs and basins.

The individual sanctuaries are clearly built along a ‘spine’ but there are places where possible water flow has broken through the former walls which, will give heritage conservation professionals some work to do. Khmer urban architecture—which may well be called landscape architecture due to its dimensions and well-thought out water management—created such structures. You can see that using suitable techniques and with the infinite conversion options provided by computers, you can set the focus in order to see the landscape- or building-sized art works or their traces from the past. There is one further interesting aspect. When the impressions of past physical realities are observed from above, you can see these built structures as their builders were never able to see them. One can only speculate on whether whoever imagined and managed the construction of Koh Ker in its golden age, for example, had that image in their mind, one which you can see and perceive today as completely self-evident. Nobody knows if they had a ‘map’ in their mind, whether they saw the greater relationships or only thought of the local systems of individual sanctuaries. Thanks to LIDAR and other modern technologies however we can see all this in its entirety today.