Kosa in the Religion and Art of Champa

Having installed, out of devotion, a Kośa of Īśāneśvara (i.e. a Lin˙ ga of Śiva called Īśāneśvara) according to true rites, the illustrious Prakāśadharma gave a crown to Bhadreśvara. May this pair, Kośa and crown, like two pillars of his fame, exist unimpaired in this world, as long as the Sun and the Moon last… When the Sun rises, the Moon is gone; and when the Moon rises, the Sun sets – this is the rule of the Universe. But the spotless Moon which is the Kośa of Īśāneśvara, and the Sun which is the Crown of Bhadreśvara… May the revered king Vikrāntavarma triumph with his Moon-like silver Kośa, without eclipsing anybody else. (Majundar, 1985: 28) The Dong Dương Stele inscription of Indravarman II, dated 797 śaka (875 A.D) gives the same information about kośa.

To the august god, who dwells in Malaya, and causes the deliverance of the world… of men… [a lin˙ga] in the form of a Kośa with a golden face, was promptly established again by the sage king. (Majundar, 1985: 74)

The Mỹ Sơn stelae inscription dated 1003 śaka (1081 A.D) records the donation of a kośa to Śiva by King Harivarman: King Harivarmadeva gave, out of devotion to Śrīśānabhadreśvara, a golden kośa decorated with the best jewels, grand, resplendent and verily like the Sun (the latter, however, does not shine day and night) brilliant with the sparkling rays of the jewels and adorned with four faces.

In the course of time, having made a kośa of gold, more beautiful than the Sun and Moon, with faces decorated by gems from the sea, as if they were lamps for the regions, the king, endowed with sublime qualities, being guided by his superior intelligence, gave it like other kośas to Śiveśānalin˙ ga who had as sculptors ‘the arms, sky, atmosphere and the moon’. (i.e. made in the year 1002): 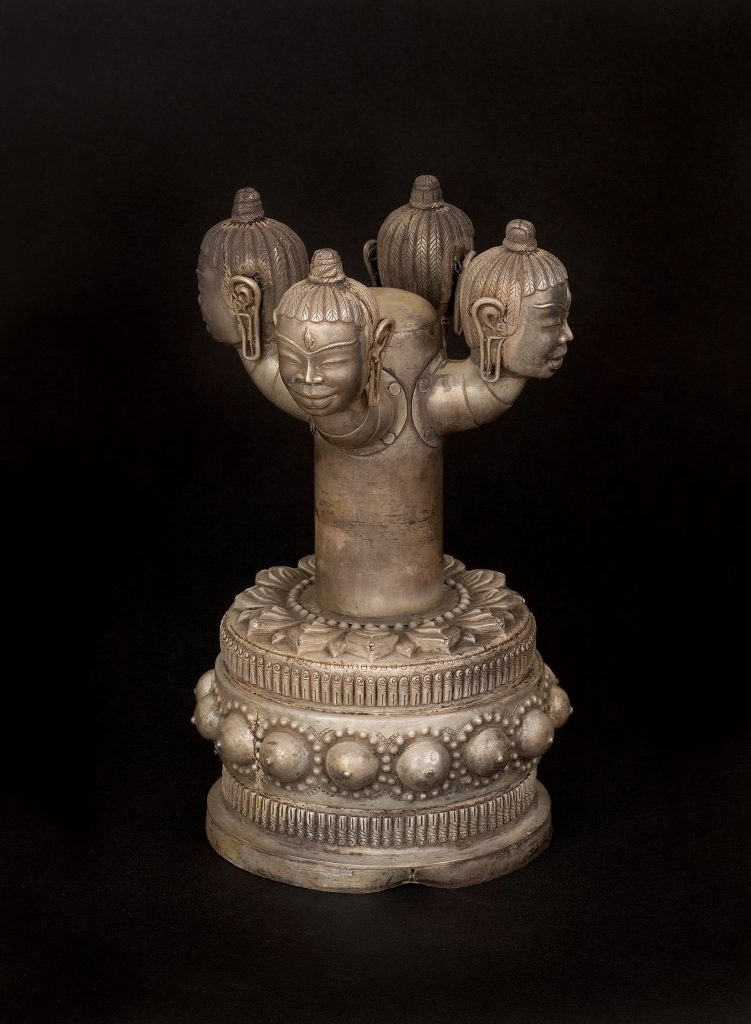 3. The five-faced god was unable to give his blessings to the king in all ten directions (on account of the wisdom of the great king?); so to protect the king he has again, today, put on five faces [thus making ten in total].

4. Śarvva, who is worthy of praise, has a great store of words, as is apparent from his (five) great and visible faces. But although presented a golden kośa he remains dumb before its unique splendours, having nothing to give which equals the splendour of the thing that was given to him.

5. In order to sing simultaneously the glories of the king’s five-fold virtues viz. mercy, fame, merit, beauty and strength, Maheśa has assumed five faces as well as five kośas [covering or vocabularies].

Not only in the North, but also in the South of the Champā kingdom, the inscriptions sometimes give interesting information about kośa. For instance, the Po Nagar stele inscription of King Satyavarman dated 706 śaka (784 AD) gives a legendary account of the installation of a mukhalin˙ ga, in the province of Kauthāra by King Vicitrasagara. In the year 696 śaka (774 AD), according to the inscription, the temple was destroyed, and the treasures of the temple, together with the lin˙ ga, were carried away. King Satyavarman pursued the plunderers and defeated them in a naval battle, but could not recover the treasures of the lin˙ ga. The king then, the inscription says, built another temple, and installed a new mukhalin˙ ga, named, after the king, Śrī Satyamukhalinga, together with an image of Bhagavatī and Gan˙ eśa in the year 706 śaka (784AD). Śrī Satyamukhalin˙ ga was called in the inscription ‘a kośa (lin˙ ga) with a face’.

So, the inscriptions proclaim the kośa to be an important constituent part of the mukhalin˙ ga symbol (lin˙ ga with Śiva face) the incar-nation of Śiva in the form of a phallus, the main object of worship of Hindus (especially Śaivaists) in general and of the Chams in particular. The inscriptions also inform us that a Champā mukhali n˙ ga usually consists of a stone phallus (li n˙ ga) in combination with a vagina (yoni), gold or silver cover (kośa) with the face (or faces) of Śiva, and a precious metal dialdem (Mukuṭa) decorated with valuables such as jewels and precious stones… However, the cover (kośa) is not only the most valuable part (all its constituent factors are made of gold, silver, jewels, precious stones), but also the most sacred image of the mukhalin˙ ga symbol, as the inscriptions had praised.

Nearly 70 years ago, in 1931, Dr. Bosch, an expert on Javanese art, aided by the following legend, interpreted some of the lin˙ gas with faces (mukhalin˙ gas), so frequently seen both in Champā and in Cambodia: One day Viṣṇu and Brahmā were disputing preeminence in the world. A gigantic pillar of fire suddenly sprang up between them. They tried to measure it. Brahmā turned into a wild goose and tried in vain to reach the top of it. Viṣṇu, became a wild boar and spent centuries digging down into the depths of the earth in a futile quest to discover its base. Baffled, the two rivals bowed down before the pillar, which was none other than the linga of Śiva. The lin˙ ga at once opened up, and Śiva appeared in person. (Bosch, 1931:419–496)

Champā inscriptions have showed that the essence of royalty, the subtle identity of the reigning being, is enclosed in the linga of the kingdom, the Champā kings gave their names to the lin˙ ga they erected. For instance, the linga of Bhadravarman, at Mỹ Sơn, was called Bradreśvara. Subsequently a successor of Bhadravarman, Śambhuvarman, rebuilt the lin˙ ga and gave it a composite name in which there appeared both his personal appellation and that of the original founder: it became Śambhubhadreśvara. 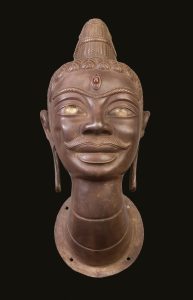 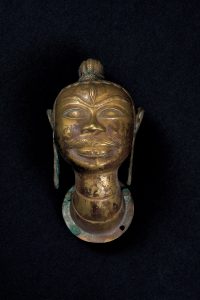 Thus, as Paul Mus interpreted, when Śiva is represented as a party emerging from the lin˙ ga, he is doing so in order to incarnate or to be reflected in his flesh and bone double, that is to say in the body of the king. (Mus, 1975: 48) As in Campuchia, the King of Champā is Śiva, visible in this world, but not Śiva in the absolute: It is a Śiva made concrete for the benefit of the kingdom. This conception clearly shows how far the cult of the lin˙ ga emulated the old rites. In Campuchia (Angkor period), the cult of the lin˙ ga had been connected with the cult of the devarāja (godking). The Campuchian god-king as king of Champā, was conceived to be the eternal, abstract essence of the king mixed with the divine essence and worshipped in the form of a lin ˙ ga under the vocabulary of the first part of the king’s name plus eśvara (from Īśvara = Śiva). (Briggs, 1951: 90) This lin˙ ga, says G. Coedès, a sort of palladium for the kingdom, is generally considered to have been obtained from Śiva by the intermediary of a brāhman who gave it to the king who founded the dynasty. (Coedès, 1938: 40–48) The sage Bhṛgu is said to have performed the same service for Uroja, founder of the dynasty of Indrapura in Champā in 875. (Majumdar, 1927: 82–83) Ā gastya seems to have performed a similar service for Java in 760. (Chatterjee, 1933: 34)

From the inscriptions, we know of 40 names of kings of Champā from Bhadravarman (4 AD) to Harivarman (1070–1081). Among these names, there were 28 names in Sanskrit. It’s easy to recognise the combination of king’s names with the different divine titles of Śiva: three kings used the title Rudra (Rudravarman); two used Bhadra (Bhadravarman and Bhadhreśvaravarman); three used Parameśvara (Parameśvaravarman); six used Indra, the title of Śiva, (Indravarman)… Moreover, sometimes, worship titles after the death of one of the kings of Champā have been connected with Śiva. For instance, the worship titles of Pṛthi­vīn­dravarman is Rudraloka (the world of Īśvara).

Though the inscriptions of Champā frequently refer to the precious metal sheaths (kośa) of the lin˙ ga, to date, only two kośas have been found. The first sheath was discovered in Hương Dinh (near the city of Phan Thiet, Bình Thuan province) at the beginning of 20th century. According to J. Boisselier, the face of the Śiva in Hương Dinh is similar to the faces of statues from the period following the Mỹ Sơn El style (first half of the ninth century) with some typical charateristics such as clear eyebrows; a long and stylized moustache and sideburns. In the Hương Dinh kośa, the small bun (jat a) of the Śiva has been decorated with a bit shaped like a left crescent moon. The features of the Hương Dinh Śiva are likend to the bun on the Śiva head in Ho Chí Minh City Historical Museum. This Śiva head is typical of the Dong Dương style (second half of the 9th century). Therefore J. Boisselier dated the Hương Dinh Kośa at the end of the 9th century (Dong Dương style). (Boisselier, 1963: 143)

The second sheath was discovered by the villager Nguyen Văn Nong in July of 1997 in Phú Long I village (Dại Thuang commune, Đại Lộc district, Quang Nam province). This sheath was introduced at the 33rd Conference for Archaeological Information organized at the end of the 1998 Archaeological Institute. The author of the information-paper, Ho Xuan Tinh, Director of the Quang Nam Museum, called this sheath a ‘Śiva head’ and dated it to the beginning of the 10th century. (Ngo Xuan, 1999: 675–676) Two years later, in August of 1999, at the Ministry of Culture and Information, we members of the Commission of Experts (made the following Decision: 1661/ QD-BVHTT) had to make an examination of the Phu Long sheath. (Ngo Văn, 2000: 59–65)

The Phu Long sheath is made of precious golden metal that has been forged and welded in the form of a man’s head. The head is 24cm high, and has a weight of 0.58 kilogram, it represents a face with some typical characteristics of the Dong Dương style (end of the 9th century) such as a round chin; thick lips; a clear moustache; two large, connected eyebrows in a long curve from one temple to the other; a one-third lengthways eye with a pupil in the forehead… It is easy to recognize that this face with its one third lengthways eyes as a representation of the face of the god Śiva. The long curved swan-neck of the head is fixed to the cylindrical sheath by four clinch-nails.

However, it is unfortunate that only two kośas have been discovered so far. We hope that in the future, more and more precious metal sheaths (kośa) will be discovered. Although, just two objects and notes in the inscriptions demonstrate that the metal sheaths (kośa) are works of a special art form associated with the very popular religion of the Champā kings, the god-king (devarāja) cult.